Here's just a short list of Northumbrian destinations,
all within easy reach of Alnmouth ::

"...famous for all kinds of wickedness."
Perched between the estuary of the river Aln and the sand dunes fringing its golden, sandy beach, Alnmouth village stands testament to the richness of its history as a thriving grain port, Victorian spa town and, finally, tourist haven. 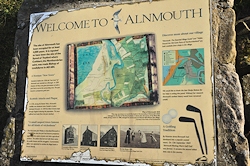 The late 17th and 18th centuries saw the heyday of Alnmouth's prosperity as a grain port with 16 granaries in the town. On Christmas Day 1806, however, the course of Alnmouth's destiny was to change irrevocably. A violent winter storm erupted and the river broke through to form the channel that exists today, cutting off Church Hill from the rest of the village. During the same storm the church was also destroyed so, for some time, the village was left without an Anglican Church. Without the natural harbour that the original course of the river had provided, the grain boats could no longer dock and prosperity dwindled until the town reinvented itself as a spa town for the wealthy. 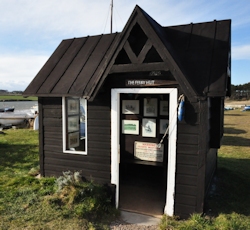 Alnmouth's scenic charm makes it very popular with TV producers. You're almost certain to have seen it featured in Robson Green's Northumbria (anonymously), the ITV series, Vera, or even Michael Portillo's Great Railway Journeys and in countless other productions. And, of course we're only three miles down the road from Alnwick Castle, well known to fans of Harry Potter, Downton Abbey and...er.. Robin Hood, Prince of Thieves! 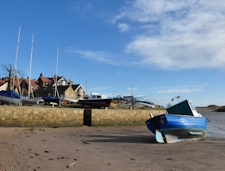 Alnmouth has lots to occupy both children and adults. The Ferry Hut, supposedly the smallest museum in England, a well-equipped play park, gift shop, post office, village store, a great selection of traditional pubs and restaurants - and, of course, the beach! The Village Golf Club, one of the oldest in England and always challenging, is open to non-members and there are many other golf courses close by. Fishing and boat trips can be arranged. Cyclists have miles of on- and off-road routes to follow and the area is a paradise for walkers of all abilities. 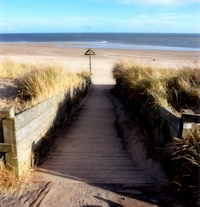 The local train station is just a mile away and puts you within easy reach of the bright lights of Newcastle and Edinburgh, with Durham and York an ideal day trip. Alnmouth is a fantastic location from which to explore the amazing Northumbrian heritage coastline and the famous castles of Alnwick, Warkworth, Bamburgh and Lindisfarne.

There's simply no excuse for not visiting Northumberland. We have an untamed primeval landscape full of ancient traditions, with the lowest population density in England. Mysterious granite islands and limestone outcrops vie for attention with isolated lakes, beautiful tumbling river valleys and golden sandy beaches as far as the eye can see. Forged from its history as a milennia-long war-zone, the front-line in a battle for the identity of these islands, we have a unique array of historical architecture from Thomas Grey's elegant Newcastle to medieval coastal fortresses and from limestone villages to the spectacular grandeur of Hadrian's Wall. 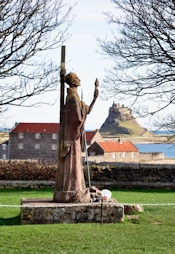 Nor does the wildlife hide in the way it tends to elsewhere. Here you'll encounter puffins, herds of wild goat, birds of prey, half the red squirrel population of England, ancient cattle breeds, bottlenose dolphins... the list is endless.

Traditional local food remains daily fare rather than the half-remembered stuff of special occasions. You'll have heard of kippers from Craster but do you know the secrets of a great pease pudding, the whys and wherefores of a stottie cake or the parochial variety of panackelty?

Border ballads, the Northumbrian pipes, the original tartan, sword dancing, Newcastle United, the Northern Lights, the Pitmatical and Geordie dialects... we could go on but why not come and experience it for yourself.

Area of Outstanding Natural Beauty? You really haven't seen one until you make the journey north.... And, of all the villages in Northumberland, we think Alnmouth has the best of everything!